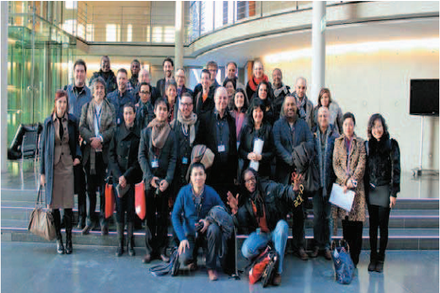 Alongside prestigious festivals such as Cannes, Venice, Toronto or Sundance, the Berlin Film Festival is one of the major events on the international film calendar. The chill of snowy winter days in Berlin failed to prevent legions of avid film lovers across the world to flock to

the event this February to see gifted filmmakers show off their latest works. The 62nd Berlin Film Festival featured 4,000 journalists and over 19,000 visitors from 130 countries. 300,000 tickets were sold.

For the occasion, the Goethe Institute in partnership with German Embassy to Vietnam invited three representatives from Vietnam to attend the festival: Mr. Do Thanh Hai, Director of Filmmaking Center of  Vietnam Television; Ms. Ha Thuc Van, Director of film production company Red Bridge; and screenwriter Nguyen Quynh Trang, lecturer at the Hanoi University of Theater and Cinema.

Heritage Fashionspoke with Ms. Ha Thuc Van of Red Bridge about her experiences in Berlin.

Hertiage Fashion: How did you become one of the three representatives from Vietnam selected to attend the Berlin Film Festival?

Ha Thuc Van: I got the invitation from the German Embassy to Vietnam. Perhaps it’s because I fit the criteria they were interested in, as a young filmmaker who has contributed to promoting our national image to the outside world and bringing the work of domestic directors to an overseas audience. I worked on the project “First Time Filmmakers Vietnam” with the Discovery Channel in 2011, and afterwards, these films were on the air constantly.

From the viewpoint of a film producer, what is your opinion of the organization of the Berlin Film Festival?

I can sum it up in two words: magnificent and professional. The Berlin Film Festival was not only a place for experienced film producers but also a place for young filmmakers. All the categories, such as Panorama or Generation, were professionally organized.

Could you give us further details on what kinds of activities were held?

There were lots of interesting activities in the festival. I was hugely impressed by a bus tour out to the filming locations of famous classic films such as Run Lola Run, Goodbye Lenin, etc.

The Berlin Film Festival greatly facilitated those who wished to introduce their domestic film industries. We had opportunities to get together and set up a common international filmmaking community. In the event held by the Goethe Institute for members in our delegation, I screened a film that received positive feedback from the audience and international critics.

In such a down period in the European economy, why do you think the Berlin Film Festival spent so much on advertising and promotion?

Indeed, the Berlin Film Festival was a huge expenditure. But when filmmakers, movie critics and journalists arrived in Berlin, they took part in many activities other than film watching and networking. Each activity was a form of natural promotion for Berlin and Germany.

What’s your assessment of upcoming chances for Vietnamese filmmakers to take part in such large film festivals?

In my humble opinion, opportunities for filmmakers are quite large. For instance the project Bi, Don’t Be Afraid! by Phan Dang Di in 2010 was granted 5000 Euros from the World Cinema Fund. This year, the movie Lost in Paradiseby Vu Ngoc Dang, which was featured in the category Panorama (for art house films), also garnered warm support from the international audience. For any film festival, what we need is intriguing plots and international standard movies.

I hope that we can do it in the upcoming Vietnam International Film Festival. It proves a good chance for film lovers in Vietnam to gain access to highly acclaimed works. We ought to take this opportunity to invite world-class filmmakers to Vietnam as well as bringing domestic filmmakers closer to the international film community. I myself am willing to serve as a bridge between Vietnamese cinema industry and the vast environment of world cinema.