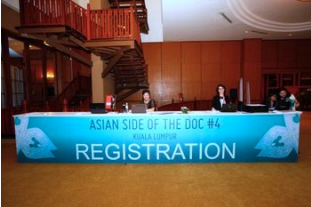 The conference first established by Sunnyside of the Doc founder Yves Jeanneau was organized by ABU member Bang Singapore in Asia. After Hong Kong, Seoul and Tokyo, the event was held this yea  in Malaysia thanks to the support of FINAS (National Film Development Corporation Malaysia) and various other Malaysian agencies, media companies Astro and Media Prima as well as overseas partners, including the European Union, Screen Australia (a strong delegation of 39 producers and commissioning editors led by Chris Oliver), the French Embassy and the Ministry of Internal Affairs and Communication, Japan. Other supporting broadcasters included NHK, KBS, France Television, Arte and Fuji Television. Prior to the event, Crossing Borders (a partnership between the European Documentary Network and Documentary Campus) held a capacity building session, which culminated in Malaysia’s first National Pitching Forum for documentaries supervised by MyDocs, Malaysia’s new independent documentary producer network.

The 4th edition of Asian Side of the Doc (ASD) held in Kuala Lumpur from March 18th to the 22nd was a resounding success this year – 512 delegates from 45 countries and 130 broadcasters attended Asia’s premier documentary forum dedicated to Europe-Asia collaboration. The delegate numbers vindicated the decision to organize ASD in Southeast Asia for the first time. This encouraged buy in from new participating countries and proved to ASD veterans that the event is growing every year and there will be always new ideas to be shared and new business relationships to be formed.